You are here: Home / Education / Mizzou continues to play it tough on COVID-19 violations 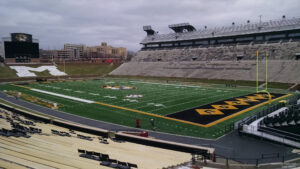 MU plans for 11,700 capacity at Memorial Stadium for the season.

Mizzou football gets underway at Faurot Field Saturday but COVID-19 restrictions and penalties are still in play for students and staff.

University spokesman Christian Basi told Missourinet that since August 15, 542 cases have been referred to the Office of Student Accountability. Some could be repeat offenders. 10 Greek Houses are temporarily suspended.

Basi said, “If we can change the behavior in such a way that it never happens again, we should be in good shape. Where we have seen willful violations, we have and will continue to see harsh penalties.”

There will be no tailgating allowed at the stadium Saturday. Spectators must wear masks entering and exiting and while in a crowd.

Hear more from Coach Drinkwitz on the upcoming game at The Bill Pollock Show podcast.