(NASCAR)—Kevin Harvick has held off NASCAR’s defending champion, Kyle Busch, in an epic last-laps battle to win the Saturday night race at Bristol for his ninth win of the year, number 58 in his career.  Busch, who has yet to win this year, started 37th after his car failed pre-race inspections, charged to second in the first stage and won the second stage before Harvick got past him with 31 laps left and outraced him to the end by three-tenths of a second. 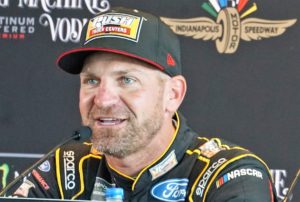 Emporia, Kansas native, sometime Missourian, North Carolina resident Clint Bowyer, who ran second in the spring race at Bristol, finished strongly in sixth place, one of his best finishes of the year, tying his best results since that Bristol race, and made it into the second round of the playoffs. Four drivers were eliminated during the first three races of the first round: Ryan Blaney, Matt DiBenedetto, Cole Custer, and William Byron.

Those running for eight semi-final slots are Harvick, Kyle and Kurt Busch, Denny Hamlin, Brad Keselowski, Joey Logano, Chase Elliott, Martin Truex Jr.,  Alex Bowman, Austin Dillon, Aric Almirola, and Bowyer.  Bowyer starts the round as the 11th seed but is only one point behind the eight-driver cut line.

The second round begins next weekend at Las Vegas, the home town (and home speedway) of the Busch brothers.

(INDYCAR)—INDYCAR is idle until a Friday-Saturday doubleheader, the Harvest Grand Prix, on the Indianapolis Motor Speedway road course October  2-3.  The season wraps up on October 25th with a street race at St. Petersburg.

(FORMULA1)—Formula 1 is off this week while the LeMans 24 Hours is run. It returns for the Grand Prix of Japan on the Sochi Autodrom on September 27.