(INDYCAR)—One of INDYCAR’s young lions dominated the second half of the weekend doubleheader at Mid-Ohio Sports Car Course—Colton Herta winning for the third time in his career. 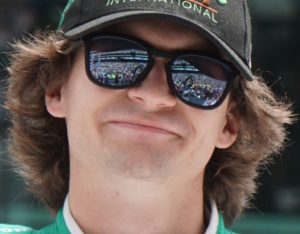 Herta, who became INDYCAR’s youngest winner last year at 19 is now 21, started on the pole, led 57 of 75 laps, and finished ahead of Andretti teammates Alexander Rossi and Ryan Hunter-Reay. He’s the seventh different driver to win an INDYCAR race this year.

The podium domination was “huge,” said team owner Michael Andretti, whose team had only one podium finish this year.

Series points leader Scott Dixon was headed for a podium finish, running second on the 22nd lap when he spun at the end of the first turn and dropped to 20th.  He came back to finish tenth, two places behind defending national champion Josef Newgarden, who had made big cuts in Dixon’s lead in the last two races.  Dixon heads into the last three races of the season ahead of Newgarden by 72 points.

Indycar has another double header October 2-3 on the road course at Indianapolis.  The season concludes on the streets of St. Petersburg October 25.  St. Petersburg was to have been the first race of the year but the coronavirus pandemic scrambled the INDYCAR schedule, as it has scrambled just about everybody’s schedule.

Dixon is bidding for his sixth series championship. Only A. J. Foyt has won seven.