(NASCAR)—Chase Elliott and Martin Truex, Jr., handed Kevin Harvick his ninth win of the NASCAR Cup season by crashing fighting for the lead with 14 laps to go in the Southern 500 at Darlington.  The victory assures Harvick will advance to the next round of the playoffs when the field is cut from 16 to 12. 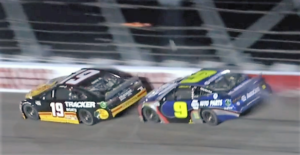 Harvick was running third while Elliott was trying to hold off a closing Truex, who dove to the inside and moved up before fully clearing Elliott’s car. Both went into the wall, causing tire damage that forced them to the pits for tire changes. Elliott finished 20th and Truex wound up 22nd.

Harvick had to hold off Austin Dillon during the last three laps to win by 0.343 second.  Joey Logano, whose car had survived body damage in an early-race re-start came home third. Erik Jones, who finished fourth, was the only non-playoff driver in the top 13. 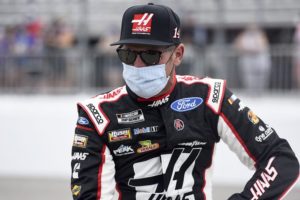 Sometime Missourian Clint Bowyer, who ran in the top five briefly, dropped into the teens on the final restart but crossed the finish line tenth, behind teammates Kurt Busch and Aric Almirola. Bowyer started the race 14th in points but is now tied with Almirola for tenth in the standings.  Only the top 12 drivers will advance to the next round after two more races.

The race started badly for playoff driver Ryan Blaney, whose car failed pre-race inspection.  Blaney was the seventh-seeded driver starting the playoffs. But he was penalized ten standings points and forced to start from the back of the field.  He made it into the top 15 before dropping back to 24th at the end. He heads to next Saturday night’s race at Richmond tied with Matt Dibenedetto for last in the standings.

(Formula 1)—A stunning Grand Prix of Italy at Monza has put Pierre Gasly on the winner’s podium for the first time, a year after he was demoted to Red Bull’s secondary team. Gasley beat McLaren’s Carolos Sainz to the finish line by-tenths of a second with Racing Point’s Lance Stoll third.  The final result is the first time since 2012 that no driver for Mercedes, Ferrari, or Red Bull had a position on the podium and the first time since 2013 that a driver for one of those teams did not win a race.

Gasly is a 24-year old French driver who started tenth but was in contention throughout a race that was altered by a major penalty to Lewis Hamilton of Mercedes and a crash by Ferrari’s Charles Leclerc that brought out the red flag.

Hamilton, who had a fifteen-second lead at one point, dove into the pits when Leclerc crashed, missing signs that indicated the pits were closed.  He had to serve a ten-second stop and go penalty that dropped him to the rear of the field.  He came back to seventh, minimizing damage to his sizeable points lead.

Gasly drove for Red Bull last year but was moved to its junior team, Alpha Tauri, after just twelve races.

Haas Racing, the only American team competing in F1, continued to struggle in its third season. Driver Kevin Magnussen is ranked 17th and teammate Romain Grosjean is 20th, and last, in the standings. Magnussen has only one point and Grosjean is one of three drivers yet to finish high enough in any race to get a point this year.  Gene Haas, the team owner, is the partner of Tony Stewart in Stewart-Haas NASCAR race teams.

(INDYCAR)—INDYCAR will be back on the track next weekend with a doubleheader event. Races will be run Saturday and Sunday at the Mid-Ohio road course/