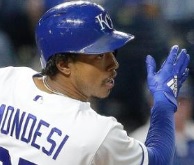 Eloy Jimenez had three hits, drove in a run and scored another in the White Sox 7-4 victory over the Royals at Kauffman Stadium.

Jose Abreu had two hits and two RBI, while Tim Anderson contributed two hits, two runs, a RBI and stole a base for the Pale Hose, who lead the AL Central with a 24-and-15 record.

Adalberto Mondesi went 3-for-4 with two RBI and two stolen bases for KC. Edward Olivares had two hits and two RBI in defeat.

The Royals have dropped four straight and are last in the division with a 14-and-25 record.