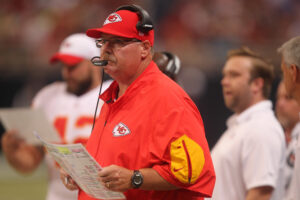 The Kansas City Chiefs are less than a week away from starting the season and expect the roster will look similar to the one last season that won the Super Bowl.

All teams rosters must be down to 53 players by 3pm tomorrow.

In one position battle, Gehrig Dieter, Marcus Kemp and Jody Fortson are competing for the final wide receiver slot if the Chiefs go with six. If head coach Andy Reid goes with only Travis Kelce and Nick Keizer at tight end, KC might keep a seventh wideout.

The Chiefs kick off the season next Thursday against the Texans at Arrowhead.