Mizzou athletes have organized a march through campus to call for social justice, first reported by KMIZ-TV. Student-athletes are promoting the march from the Mizzou Athletics Training Complex (The MATC) to The Columns starting at 6 p.m. Wednesday.  Below is a flyer that is being circulated. 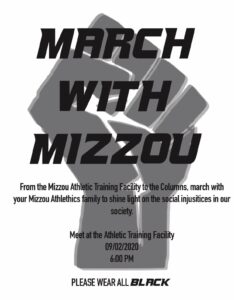 On Friday, the football team canceled practice, “in order to focus on the current state of our country,” a statement released from the team said.  On Saturday, following practice, Head Coach Eli Drinkwitz addressed the team meeting and how he see his role moving forward.

We are relentless in our pursuit of equality for all. pic.twitter.com/gxYyEn1XQs

Previous Post: « Waino and Yadi’s accomplishments on Sunday made me think about the greatest Cardinal of all-time (PODCAST)
Next Post: Missouri Marine veteran makes it to ‘Tough As Nails’ season finale »