(NASCAR)—Denny Hamlin got the lead back with eight laps left at Dover Saturday and built it to more than a full second to win his sixth race of the year.  His win ties Kevin Harvick for most wins in 2020. The two of them have won half of the twenty-four races on the NASCAR Cup Schedule.  Harvick finished fourth behind Kyle Busch and ahead of Chase Elliott and Clint Bowyer. 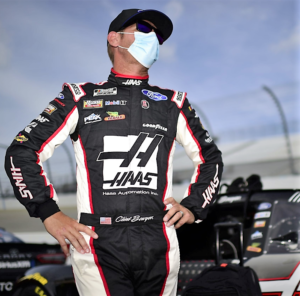 Bowyer’s second straight top-ten finish solidifies, but does not fix, his position as a playoff-bound driver. He’s fourth in points among non-winning drivers, seventy-eight points ahead of William Byron, who would be the first driver outside the playoff field if it were set today.  He also has a fifty-one point cushion on Matt DiBenedetto, his closest playoff rival.

Two races are left before the ten-race playoff season begins.

Truex’s second-place finish has gotten him out of a third-place rut. He had finished there in five straight races.

NASCAR returns to Dover for the second half of its weekend doubleheader Sunday. The positions of the first twenty finishers in the Saturday race will be inverted for the start of Sunday’s race, meaning Hamlin and Trued will start in the tenth row while DiBenedetto, who finished twentieth and Ryan Newman, who finished nineteenth, will start of the front row.

(INDIANAPOLIS)—Much of the “spectacle” of the “Greatest Spectacle in Racing” will be missing Sunday when the green flag drops on the 104th running of the Indianapolis 500.  For the first time, there will be no fans in the massive grandstands at the oldest track in the world that calls itself a speedway.

This also will be the first time the race will be started outside the month of May. The level of COVID-19 cases in Indianapolis in May forced new track and series owner Roger Penske to push the 500 back to this weekend.  Until a few days ago he hoped to allow at least some fans to be at the track. But continued health concerns forced him to reluctantly close the track to fans for the race. Several thousand are expected, however, to set up chairs outside the track and watch the race through gaps in the grandstands on large viewing screens that are inside the track.

Marco Andretti, one of five drivers to qualify at more than 230 miles per hour, will lead the field at the start.