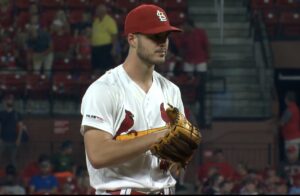 Matt Davidson’s sixth inning pinch-hit grand slam lifted the Reds to a 4-2 triumph over the Cardinals in St. Louis.

Four Cincinnati relievers did not allow a hit over four-and-two-thirds innings. Michael Lorenzen got the win, while Raisel Iglesias picked up his third save.

The Reds managed only two hits in winning for the third time in five games.

Starter Dakota Hudson allowed just one hit over four and two thirds but took a no-decision.

Matt Carpenter and Brad Miller plated the St. Louis runs. The Cards are 3-4 in their last seven.