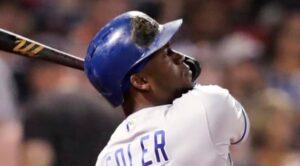 Jorge Soler hit a three-run homer in the first inning to power the Kansas City Royals past Minnesota 7-2 to open the third straight weekend series between the AL Central rivals.

Hunter Dozier added a two-run shot and finished with three RBIs as Kansas City won for the sixth time in its last seven games at Kauffman Stadium.

Twins starter Jake Odorizzi (0-1) allowed five runs and seven hits before he was literally knocked from the game. Alex Gordon drilled him with a liner in the ribs, and the right-hander went to the
ground immediately. X-rays taken at the ballpark were negative, and the Twins called his injury a bruised right abdomen.