(INDYCAR)—Marco Andretti has ended one long drought for the Andretti family. Next Sunday we’ll learn whether he ended an even longer one. 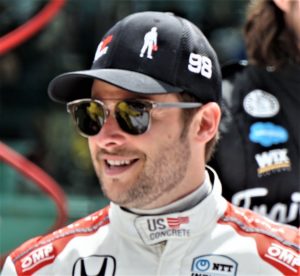 Andretti will lead the field to start the Indianapolis 500, the first Andretti to start from the pole in the World’s Greatest Spectacle in Racing since his grandfather, Mario, started P1 in 1987.  Marco’s four-lap qualifying average of 231.068 mph pushed Scott Dixon to the middle of the front row. Dixon’s four-lap average was 231.051.

Andretti’s total time for the ten-mile run was .0113 of a second faster than Dixon’s, a little faster than nine eye blinks for the four laps.

Grandfather Mario also won the pole in 1966.  He won the race in 1969.  Marco’s father, Michael, never won the 500 and holds the record for most laps led by a non-winner.  His best start was third. He finished second once and third twice in sixteen races.

This will be Marco Andretti’s fifteenth Indianapolis 500. He finished second in his first race, in 2006 and has been third three times.

Starting on the front row with him will be 2008 winner Dixon and 2017 winner Takuma Sato, making his first start from the front row. Nineteen-year old Rookie Rinus Veekay sarts behind Andretti next to 2014 winner Ryan Hunter-Reay and James Hinchcliffe. The last three of the “Fast 9” who took part in the final runoff for the poll are Rookie Alex Palou, Graham Rahal—the son of the 1986 winner—and Alexander Rossi, who won the 100th running of the 500 in 2016.

Other past winners had disappointing qualifying runs.  Will Power (2018) starts 33nd. Tony Kanaan (who won the race in 2013 at a record speed of 187.433 mph) starts 23rd. Last year’s champion, Simon Pagenaud, will go off 25th next Sunday and three-time winner Helio Castroneves starts 28th in the 33-car field.

(NASCAR)—Chase Elliott has established himself as the master of NASCAR’s road courses with his third straight win on a crooked circuit, holding off Denny Hamlin by two-tenths of a second on the new NASCAR road course at Daytona.  Elliot had a substantial lead with ten laps to go but Hamlin was eating into it and got a break when the last yellow flag of the day let him restart the race alongside Elliott with three laps left.

Martin Truex Jr., was third for the fifth race in a row, followed by Jimmie Johnson, Chris Buescher and Clint Bowyer.  Bowyer (in the 14-car, fifth row, early in the race) ran a solid race all afternoon, starting 12th but finishing fourth in the first segment, second in the second segment, and finishing 6th.

Three races are left—two as a Dover doubleheader next weekend and a return to the Daytona high banks—before the field is locked in for the ten-race playoff.  Bowyer remains fourth among the six non-winners in contention for the final half-dozen playoff slots. He’s 41 points ahead of William Byron, who would be the first man out so far.

(FORMULA 1)—Lewis Hamilton admits he was in a “different zone” in the Spanish Grand Prix that enabled him to finish 24 seconds ahead of his closest competitor and 45 seconds ahead of teammate Valtteri Bottas.  It’s Hamilton fiftieth podium finish, a new record. 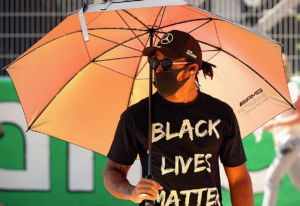 Hamilton, Formula 1’s only African-American driver has turned this season into a “Black Lives Matter” campaigh.  He was one of thirteen drivers who knelt before the start of the race. Seven others stood but all wore “End Racism” t-shirts. 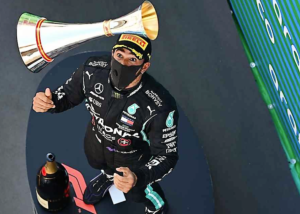 Hamilton (playing with the victor’s trophy) now leads the championship points by 37 over Max Verstappen of Red Bull, and by 40 over Bottas, his Mercedes teammate.

Kimi Raikkonen set a new F1 record in the race with his 37th lap, giving him 83,846 kilometers (52,099 miles) in Formula 1 competition, more than any driver in the 70-year history of Grand Prix racing. It’s the equivalent of circling the earth twice. He is within three races of equaling Reubens Barichello’s 322 F1 starts.  He finished 14th, however.

F1 doesn’t race for two weeks, when it runs the Grand Prix of Belgium.