A Missouri Department of Health and Senior Services survey shows in at least 50 counties, the local governments have not passed federal coronavirus relief funding to their health departments. The state has received billions of dollars in CARES Act money to help it deal with the pandemic that has infected more than 55,000 Missourians and killed at least 1,273 others. 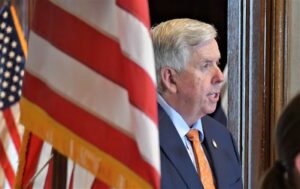 During a press conference Wednesday at the state Capitol, Gov. Mike Parson called on county leaders across Missouri to prioritize the distribution of those funds. Parson says the state legislature passed a spending bill requiring the federal aid to be delivered to counties within ten days, which he says the state did.

“But so far, much of this money has not been distributed to those on the front lines of the public health response,” says Parson. “I cannot emphasize enough how important it is for these funds to be distributed and utilized, especially when it comes to testing and contact tracing.”

“That is why it is so critical that our local health departments receive the CARES Act funds so they can continue building up contact tracing and testing efforts in their communities,” says Parson.

In several cases, county commissions have been at odds with their health departments over how they have handled the pandemic.