You are here: Home / Health / Medicine / DHSS: Four have tested positive for COVID during special session testing at Missouri Capitol

State health officials say four people have tested positive for the coronavirus, during recent testing events at the Missouri Capitol in Jefferson City. 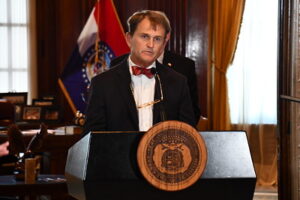 The testing has taken place during Missouri’s special legislative session on violent crime, a session that continues. Senate Minority Leader John Rizzo, D-Kansas City, called on the Missouri Department of Health and Senior Services (DHSS) to provide testing to anyone working within the Capitol in conjunction with the special session.

DHSS Director Dr. Randall Williams responded to Senator Rizzo’s call, and there have been several days of testing. Missouri lawmakers, staff members and Capitol reporters have been eligible for the tests.

DHSS says of the 228 total individuals who have been tested at the Capitol, four tested positive. During a Capitol media briefing in Jefferson City today, Dr. Williams told Missourinet that he would brief legislative leaders about the numbers first, then would release them.

His office e-mailed the numbers to Missourinet about two hours later.

Leader Rizzo has praised the community testing events that DHSS has held with the Missouri National Guard, saying that testing events in the Capitol would help ensure the health and safety of those within the building.