A conservative state representative who describes himself as the “most conservative, most constitutional and most pro-life legislator in Missouri” will be heading to the Missouri Senate in January, after winning a GOP Senate primary in southwest Missouri. 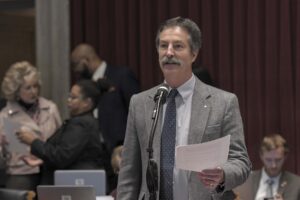 No Democrats filed for the seat, which means Moon will replace term-limited State Sen. David Sater, R-Cassville. Sater was elected to the Missouri Senate in 2012 and was re-elected in 2016. Sater will leave office at the end of December.

Moon, who was elected to the Missouri House in a special election in April 2013, says he’s focused on ending abortions in Missouri.

“I believe that at the point of conception that is a result of a unique human individual with separate unique DNA, and they should be protected by law,” Moon told Missourinet in July.

Moon says the government’s primary purpose is to protect the liberty of the people and to protect their property. His priorities also include eliminating the corporate tax, and ending what he calls burdensome regulations on farmers, businesses and residents.