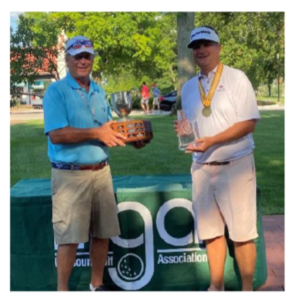 Richard Berkmeyer of Town and Country fired a final round 6 under 63 to capture the 2020 Missouri Stroke Play Championship.

Berkmeyer who was a past member of host course Norwood Hills used his course knowledge and skill to take the victory.

The win makes Berkmeyer a three-time champion of the Missouri Stroke Play Championship. Berkmeyer’s final round was bogey free while carding six birdies. Berkmeyer had a four-day combined total of 271.

Ryan Sullivan of Arrnold was the funner up shooting a 4 under final round and a fourday total of 275. Logan Smith (La Plata), Joe Migdal (Ballwin), and Eckelkamp all tied for third place with scores of 276.