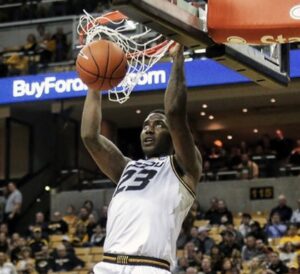 Mizzou Men’s Basketball standouts Xavier Pinson, Mitchell Smith and Jeremiah Tilmon, Jr., have submitted paperwork to officially withdraw from the 2020 NBA Draft process and return to Mizzou for the 2020-21 campaign, head coach Cuonzo Martin announced Friday. The trio had until Aug. 3 to make their decisions.

With the return of Pinson, a rising junior, and rising seniors Smith and Tilmon, Jr., the Tigers’ 14-man roster currently boasts 11 student-athletes who are juniors or older, the most in the Southeastern Conference and the third-most among all Power Conference programs. With just one true freshman, Mizzou will have one of the most experienced rosters in all of college basketball in 2020-21.

“I am thankful that despite the process being limited due to the pandemic, all three guys were able to receive key information that can help them in their respective futures,” Martin said. “We’re thrilled to have a deep, experienced squad back for what will be a very exciting season ahead.”

Pinson started all 31 games as a sophomore, averaging 11.1 points per game while shooting 40 percent from the field. He was electric down the stretch of the season, pouring in 18.9 points per game over the final nine contests, including four 20-point games. Pinson scored in double digits 14 times, with nine of those coming in league play.

Smith enters his fifth season at Mizzou as a redshirt senior coming off his best campaign yet in 2019-20. The 6-foot-10 forward set career-high season totals with 153 points, 146 rebounds and 20 assists. He stretched the floor with 20 triples and shot 85.4 percent from the free throw line to help Mizzou set a new single-season program record at the charity stripe.

Tilmon, Jr., has 81 career games under his belt as he enters his final season at Mizzou. The gifted 6-foot-10 center has averaged 8.9 points and 4.9 rebounds over his career, shooting 56 percent from the field, which is tied for fourth all-time in program history. Tilmon, Jr., has 79 career blocked shots after swatting 21 shots as a junior. Last season, he was hampered by a foot injury but tossed in 8.2 points per game while shooting 58.9 percent in 17 games.