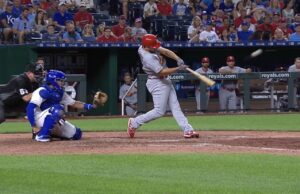 Paul DeJong homered and drove in three as the Cardinals defeated the Royals 6-3 at Busch Stadium in the final tune-up before their season opener.

Bubba Starling and Salvador Perez homered for the Royals who went 0-3 in exhibition games.

Former first-round pick Foster Griffin was the losing pitcher, allowing two runs on three hits, two walks and a wild pitch, while retiring only three of the eight batters he faced.