(NASCAR)—Denny Hamlin ran down Keven Harvick then had to hold off Brad Keselowski to get back to an empty victory circle in a rare Thursday night race.  The win at the Kansas Speedway, minutes to the west of Kansas City, is his fifth of the year and comes after disappointments at Indianapolis, where he crashed in the lead with eight laps to go, and mediocre finishes at Kentucky and Texas, where he led a combined total of only eleven laps.

The win is his third at Kansas, 42nd in his career—fourth among active Cup drivers behind Jimmie Johnson (83), Kyle Busch (56), and Harvick (53). 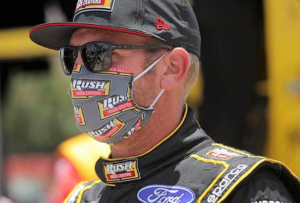 Clint Bowyer, who drew a mediocre starting position, 19th, made it into the top ten as the race ran into its third stage but, as has been frustrating to him this year, he was unable to close it out and came home 14th.  Although he is 12th overall in points, he is 13th in the playoff standings—third among six drivers competing for the final playoff positions with six races left before the championship field is set.

(INDYCAR)—INDYCAR is considering rewriting its race schedule again because the Coronavirus continues to cause problems at some planned venues  and Missouri fans might reap the benefit.  RACER magazine’s Marshall Pruett reports the series is committed to at least fourteen races this year. It has run eight so far.  The series has been planning on a four-race West Coast swing with doubleheader races at Portland, Oregon and at Laguna Seca in Calfornia.  But the Coronavirus rate increases and other factors have officials uncertain about that part of the schedule.  The series also is concerned about the cost of flying teams to the coast, limits venues might place on the number of crew members that can be at the tracks, and uncertainty about whether Laguna Seca can have enough volunteers to manage races scheduled there.

Pruett says INDYCAR is considering turning its next event, at Mid-Ohio on August 9 into a two-day doubleheader, and turning the race at Gateway, just outside St. Louis into another doubleheader weekend.  In addition, the planned Harvest Festival on the Indianapolis Motor Speedway road course also is being considered as a doubleheader.