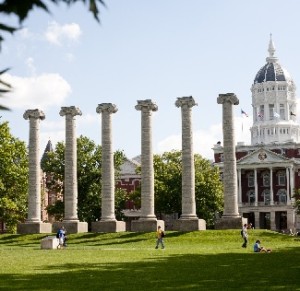 eek announced a series of actions to address inequities and inclusion, including

In August, the university will launch a “Bias Hotline” so students, faculty and staff can anonymously report acts of discrimination or racism.  Since student protests and the resignation of the school’s president in 2015, Mizzou has redirected its policies and staffing to focus on repairing race relations and improving diversity. This includes inviting scrutiny from the American Council on Education, which released its second report on the university’s progress since 2015.

“This work is never complete, but we are committed to doing the hard work necessary to become a better Mizzou.” President and Chancellor Mun Choi said after the report and a panel discussion presented online last week.

The newly-hired Vice-Chancellor of Inclusion, Diversity & Equity Maurice Gipson will oversee much of this work. He says Mizzou’s program is uncommon because of the “stable infrastructure” it now has in place.

“With this type of capacity, over 30 fulltime staff members and another 30 or so part-time, having an infrastructure that large just speaks to Mizzou’s commitment,” Gipson told Missourinet.

Gipson was in a similar position at Arkansas State University before coming to Mizzou. He says providing off-campus experiences were an important part of his success.

“Making sure that our students have these transformational experiences which they are engaged with people they are less familiar with or go and engage with students from around the country, I think that helps them become better global citizens.”

His vision is that everyone who wants a college education should be able to achieve one. He was the first in his family to go to college and was from a poor family. He saw college as a way to level the opportunities for any student.

“If you want to have just a conversation just about race and ethnicity, then we are not going to have a productive and fruitful conversation because diversity is so much more than that. An issue that is very near and dear to me is making sure that we can pull our students out of some of this cyclical poverty,” Gipson said.

“If you want to pull students out of cyclical poverty, a college education is a way to do that.”

LISTEN to the interview with MU Vice-Chancellor of Inclusion, Diversity & Equity Maurice Gipson (15:04)

Previous Post: « Royals place Junis on IL to give him extra time to prepare for the season
Next Post: St. Louis couple charged with felonies for waving guns at protestors, state attorney general gets involved »