(NASCAR)—Austin Dillon beat rookie Tyler Reddick to the finish line at Texas Speedway by .15 of a second to get his third career Cup win, surviving a race that saw several competitors knocked out or crippled by crashes.

Clint Bowyer came home 11th, leaving him 13th in overall points.  Dillon’s win makes him the tenth driver locked into a playoff spot, leaving only six vacant slots to be filled in the next eight races. He is fifth in points among non-winners this year with a 33 point cushion on Dillon and 34 ahead of Jimmie Johnson who is, at this point, the first driver outside the playoff field.

(INDYCAR)—Roger Penske’s drivers won the first two races for Penske since he bought the INDYCAR series last fall.  But the big winner of the double-header weekend at the Iowa Speedway might have been the new Aeroscreen added to the cars during the offseason.  Two incidents in Friday night’s race amply demonstrated the value of the new safety device which adds a titanium halo over the driver’s head and an aerospace developed material as a windshield.

When Will Power lost a left front wheel on the 144th lap of Friday night’s 250-lap race, the wheel bounced right over the cockpit where Power sat sheltered by the titanium cockpit protective device designed to keep debris from entering the cockpit. 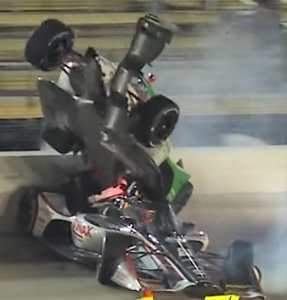 Thirteen laps later, as the field was about to resume racing after Powers’ incident, Colton Herta’s car, accelerating for the start, rode up over the left rear wheel of Rinus Veekay, over Veekay’s cockpit, and into the air before landing on its wheels.  Debris from the crash also hit a trailing car driven by Marcus Ericcson, but the Aeroscreen protected him, too.

Newgarden, who was disappointed in his performance Friday night started from the pole and finished in the position from which he started, beating Power across the finish line by about 2.8 seconds. Graham Rahal took the other podium finish with Pagenaud fourth, holding off Dixon

Dixon, with five top five finishes in the first six races of the year, leads Pagenaud by 49 points with six races left in the INDYCAR season. Newgarden holds third, 53 points out.

Indycar runs next on August 9 on the Mid-Ohio road course.

(FORMULA 1)—Lewis Hamilton is back in his usual place on the track and in the points. His “pretty beautiful day” saw him win the Hungarian Grand Prix, building an eight-second lead in the first three laps on a wet track and holding that margin at the end.

It was something of a milestone day for Hamilton, who is now tied with Michael Schumacher with eight wins in the Hungarian Grand Prix, a record for most wins on any Formula 1 track. His 86th win puts him within five of Schumacher’s record 91 and the victory puts him back in the F1 points lead as he tries to equal Schumacher’s record of seven championships.

He started from the pole for the 90th time, 22 more poles than any other driver. Schumacher had 68.

Hamilton, with two wins, leads Bottas—the winner of the first race of the year—by five points and Verstappen by thirty.

Formula 1 takes off for a couple of weeks before the British Grand Prix at Silverstone on August 2.

Previous Post: « Missouri’s governor wants special session on violent crime to be done as quickly as possible
Next Post: COVID-19 could cause greater Missouri teacher and bus driver shortages this fall »