(NASCAR)—Chase Elliott and his team will share the $1.1-million dollar winner’s check after Wednesday night’s NASCAR All-Star race at Bristol. It’s only the second time in All-Star Race history that the event has not been held at Charlotte. 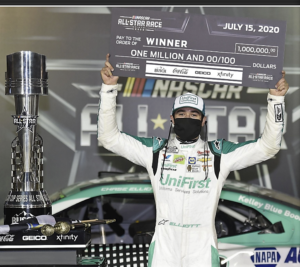 He is the second son of a former race winner to also come home first. Dale Earnhardt Sr., and Jr., also won the race. Elliott stayed on the track for the final 15-lap shootout stage while several other challengers took new tires, then held off Kyle Busch by four-tenths of a second.

The field of sixteen drivers was joined by four drivers from the All-Star Open for drivers who didn’t otherwise qualify for the big race. Aric Almirola, Ryan Blaney, and Matt Dibenedetto raced their way into the starting field by winning stages of the Open while sometime Missourian 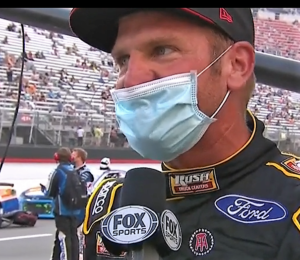 Clint Bowyer was voted into the final by the fans. Bowyer started last in the All-Star race and climbed into the top ten for two of the four stages of the All-Star race but was unable to climb back through the field after the late stop for tires and crossed the line fifteenth.

The race was run in front of about 30,000 fans, the largest sporting event attendance in this country since (perhaps) the Super Bowl. The Bristol Track has about 120,000 seats.