Missouri’s governor confirms he plans to call a special session later this year, to address violent crime in the state. Governor Mike Parson (R) made his comments Monday at the Statehouse in Jefferson City, in response to a question from Missourinet. 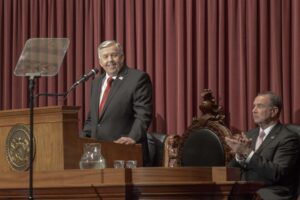 “I think I’ve talked to most of the mayors for weeks now, about the issue of crime,” Parson says.

Kansas City Mayor Quinton Lucas is asking the governor to call a special session about crime, saying his city is at a “crisis point”. There have been at least 101 homicides in Kansas City this year, and the “Kansas City Star” reports 2020 is on pace to be the city’s deadliest year on record.

Across the state in St. Louis City, Missourinet contributor Jill Enders reports 24 people were shot over the Fourth of July holiday weekend, seven of them fatally. One of them was a four-year-old boy.

The governor says he had a good phone conversation this weekend with Kansas City’s mayor.

“We talked about some of the officer shootings they’ve had, more on the violent crime side,” says Parson. “I emphasized to him I thought through the legislative process last year we should have got some key elements done. He agreed that that should have been done.”

Mayor Lucas wants to see funding increased for witness protection, and wants more tools for law enforcement to be able to interrupt conspiracies to commit murder.

It’s unclear when the special session will start.

One of the key proposals in Governor Parson’s January State of the State Address was about $1 million in funding for witness protection, in an effort to battle increasing violence in urban cities.

Despite bipartisan support in both chambers, the measure did not pass.

State Rep. Chuck Basye, R-Rocheport, is a strong supporter of witness protection, telling Missourinet at the January State of the State that witnesses fear retribution.

“I hear law enforcement say that very thing that there are people that they know that know who these individuals are that are committing these crimes but they’re scared to death to come forward because they don’t want to be the next victim,” Basye said that day.

Click here to listen to Missouri Governor Mike Parson’s response to Brian Hauswirth’s question about a special session on violent crime, and about the governor’s phone conversation this weekend with Kansas City’s Mayor: