(Indianapolis)—-The Racing Capital of the World, as it’s called, has finally seen the heat of competition, two months after it normally would have held its first race of 2020. An unprecedented weekend shared by INDYCAR and two NASCAR national series races featured scintillating competition—in front of empty grandstands because Indianapolis had not reached the state-mandated standard for opening sporting events to large crowds.

(INDYCAR)—Normally the INDYCAR road race would kick off the month of May but racing’s schedule has been scrambled because of the virus.

The misfortune caused by the virus, however, led to the historic  weekend of racing at the Indianapolis Motor Speedway beginning with the INDYCAR road course race won by Scott Dixon.

That was followed by the first stock car race on the road that snakes through the IMS infield and uses what is normally turns two and one and the main straightaway, the Xfiniity series race run by Chase Briscoe. Then Sunday, the Brickyard 400 was run on the July 4th weekend at Indianapolis for the first time. NASCAR’s July 4th weekend Cup race has been at Daytona until now.

(INDYCAR)—Defending INDYCAR champion Scott Dixon caught a break with a caution light after the race’s only crash to move into contention and took the lead on the 48th lap with a pass of Graham Rahal on the front stretch just before the turn onto the road course. 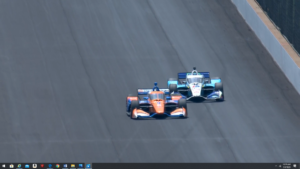 He pulled away to an almost-twenty second win. The first part of the race was dominated by drivers for Speedway owner Roger Penske. Will Power led teammate Josef Newgarden by about 3.7 seconds when the yellow flag came out for a crash by Oliver Askew. Both pitted while Dixon stayed out and restarted third. He soon disposed of Spencer Pigot and then picked off Rahal, and rotated back to the lead after the final round of stops with 25 laps to go. 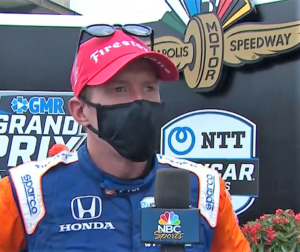 The win is Dixon’s 48th career win. He’s now just four behind Mario Andretti for second on the all-time INDYCAR wins list. He has won both races this year. The victory breaks the stranglehold Penske drivers have had on the Speedway road course. Power and Simon Pagenaud had split winning the six previous events.

INDYCAR runs a double-header at Road America, Wisconsin next weekend with races Saturday and Sunday.

(NASCAR INFINITY)—Indiana native Chase Briscoe won a four-car race down the main straightaway and into the turn to the infield part of the track to take his final lead of the race, then held off fellow Indiana native Justin Haley for a 1.7-second win. It’s his fifth victory of the year in the top feeder series for future Cup drivers.

Briscoe out-braked A. J. Almendinger at the end of the straightaway and fought off Almendinger’s effort to take back the lead as the course snaked its way to Hulman Boulevard, a long straightaway through the heart of the Speedway that normally is a road on regular race days.

(NASCAR CUP)—Denny Hamlin had seized the lead from Kevin Harvick late in the race and was in control with seven laps to go when a right front tire failure sent him into the wall. 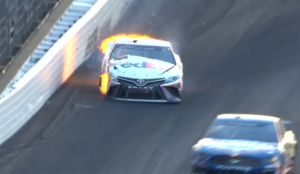 Harvick (shown here passing the wrecking Hamlin) got the drop on Matt Kenseth on the overtime restart after debris from the Hamlin crash was cleaned up and picked up his third Brickyard 400 victory, his fourth win of the year.

Clint Bowyer ran within the top ten for much of the race but was 16th at the end. He is still in the running for a playoff position based on points, however.

(FORMULA 1)—Formula 1 has finally started its 2020 season with Mercedes driver Valtteri Bottas picking up the win over Ferrari’s Charles LeClerc in the Austrian Grand Prix. McLaren driver Lando Norris took the final podium spot and became at age 20 the youngest British driver in F1 history to get a podium finish.

Defending world champion Lewis Hamilton finished in second place but was demoted to fourth when race stewards assessed him a five-second penalty for causing Alex Albon to spin on the last restart.

Formula 1 will be back on the same track next weekend.