(NASCAR)—Kevin Harvick finally has a victory at Pocono in his thirty-ninth race at the “tricky triangle.” Harvick’s third win of the season was by three-fourths of a second over Denny Hamlin, who threatened Harvick in the last twenty laps despite having a car with a bad vibration. 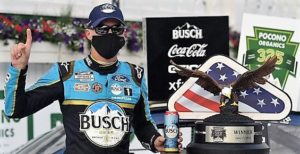 Harvick had finished second at Pocono four times, had finished in the top five a dozen times, and had been a top-ten finisher eighteen times. His victory kept Hamlin from a fourth victory this year, which would have been the most in the Cup series. The race was run with no fans in the stands because of the COVID-19 Pandemic. The stands will be empty again for tomorrow’s races.

Aric Almirola, who led 61 of the race’s 130 laps, lost the lead in the final pit stops when he took four tires and Harvick took only two and came home third. He was followed by rookie Christopher Bell, two-time Cup champion Kyle Busch, Martin Truex, Jr., and Clint Bowyer.

Eight drivers who have won at least one race this year are locked in to playoff positions. Bowyer is fourth among the eight winless drivers who are in the top sixteen in points. The race was the fourteenth of the season; the playoff field will be the top sixteen drivers after the twenty-sixth race.

The race was the first half of an unprecedented double-header weekend for NASCAR. Most of the Cup cars that raced Saturday will race again Sunday afternoon. Drivers whose cars were too badly damaged Saturday can start at the back of the field Sunday in backup cars.