You are here: Home / News / Missouri native to take another spacewalk today

NASA astronaut Bob Behnken is expected to get suited up today and take a walk in space. He’s changing out all the batteries on one of the International Space Station channels today. Behnken, a St. Louis County native, talked this week with NASA officials about the project that is expected to take about six-and-a-half hours to complete. 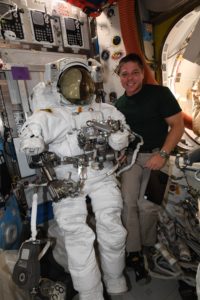 “When the Space Station is in the sun, it’s collecting energy and it needs to store that for when it’s in the dark,” says Behnken. “And so those batteries, as they are cycled time and time again, they wear down and need to be replaced.”

Since joining NASA twenty years ago, Behnken has logged more than 37 hours of spacewalk time.

“I really look forward to the views of the Earth when we get a free moment,” he says. “I think each astronaut, when they go out on their first spacewalk, they’re really focused on trying to get all the activities accomplished and do a good job so that they can probably get a chance to do another one if the opportunity presents itself. After you’ve done a couple and know what to expect as you go through it, it is important to take some mental photographs, some mental images to remember what it was like to be outside so you can share that experience.”

Coverage of the event is scheduled to begin at 5 a.m. CST. The spacewalk is set for 6:35 a.m. You can watch the event live on NASA’s website.

Behnken and astronaut Doug Hurley are expected to undock and head back to Earth around August 2.