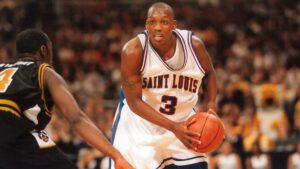 The Saint Louis men’s basketball program is mourning the sudden death of former player Justin Love. The 41-year-old was found unresponsive yesterday at Mascoutah, Illinois High School, where he was the head basketball coach. Love played two seasons for the Billikens and was named MVP of the 2000 Conference USA Championship. He was inducted into the Billiken Hall of Fame in 2009. Love played professional basketball overseas before returning to the area to begin a high school coaching career.

In 1999-2000, Love again led the Billikens in scoring with 18.2 ppg, and he was a catalyst in what is one of the greatest moments in SLU men’s basketball history. As a No. 9 seed at the 2000 Conference USA Championship in Memphis, the Billikens rolled to four wins in four days to capture the league title and earn an automatic bid into the NCAA Championship. That legendary moment in SLU history is referred to as the “Miracle in Memphis” by the SLU faithful.

Just as legendary as the Billikens’ tournament win was Love’s performance during those four games. He set tournament records for total points and total 3-pointers en route to earning C-USA Championship MVP honors.

Previous Post: « Baseball is back! Royals and Cardinals will face each other four times during 60-game season
Next Post: Missourinet Morning News 6-24-2020 (Audio) »