You are here: Home / Business / $2 billion in unemployment claims paid in Missouri during pandemic; work search requirements to resume July 5

State officials say the Missouri Department of Labor and Industrial Relations (DOLIR) has paid more than $2 billion in unemployment claims during the COVID-19 pandemic. 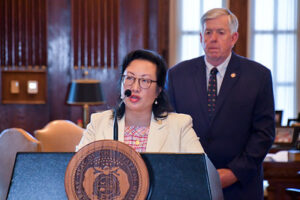 DOLIR Director Anna Hui says initial unemployment claims have dropped from about 100,000 in late March to about 20,000 in early June. She says America’s unemployment program was designed and is intended to be a temporary, partial replacement of income.

“Since March 28, eligible Missouri claimants have been receiving an average weekly benefit payment of nearly $900, which includes the $600 federal supplement,” Hui says.

Director Hui tells Capitol reporters in Jefferson City that a system that rewards individuals to be unemployed is unsustainable.

“According to a recent University of Chicago study, two-thirds of people getting unemployment are receiving more than what they earned from their jobs,” says Hui.

Director Hui says that study found that 20 percent of those on unemployment are receiving two times or more in their benefits, than what they used to make.

DOLIR says that starting on July 5, Missourians who want to continue to receive unemployment benefits will be required to perform three work search activities per week. Those activities include filing an application, attending a job fair, and job interviews.

Hui says the work search waivers were put in place during the height of the pandemic and were designed to help the economy, businesses and families during a time of total shutdown.

The state Department of Economic Development (DED) says Missouri’s May unemployment rate was 10.1 percent. While that is an improvement from April’s 10.2 percent rate, DED notes it’s three times higher than the May 2019 rate.

One issue that several rural Missourinet listeners have raised is the digital divide, specifically the lack of broadband access in parts of rural Missouri. Missourinet asked Director Hui about that issue, during the recent media briefing at the Capitol.

State officials have announced today that Missouri Job Centers have started reopening to the public. The St. Louis, St. Charles and Springfield facilities are now open.

Job seekers and displaced workers who have questions or who lack internet access can still access services by phone, by calling 1-888-728-5627.