(NASCAR)—NASCAR Cup drivers started the race showing their close support for one of their own and finished the day with one of the closest finishes in Cup history.

Ryan Blaney beat Ricky Stenhouse to the finish line by 0.007 second. The rear bumper of Aric Almirola’s car reached the finish line inches ahead of the nose of Denny Hamlin’s car as racers crashed behind Blaney and Stenhouse.

Clint Bowyer, who ran at the back of the pack most of the day to stay out of trouble, was running eighth with two laps left when he had to pit for a splash of gas. He finished 25th. 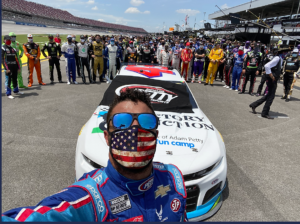 The day began with all of the drivers pushing the car of Bubba Wallace to the front of the cars lining the pits to show their support of the only African-American driver in the series. Yesterday afternoon, a noose was left in Wallace’s garage. The FBI is investigating. NASCAR says it will issue a lifetime ban against the person responsible.

Wallace is considered the leader NASCAR’s effort to ban Confederate flags from races and to support the Black Lives Matter movement. Wallace led the race briefly in the final stage before having to make a late fuel stop and finished fourteenth in the wild last-lap scramble for position. After the race, he said, “The sport is changing. The deal that happened yesterday—I wanted to show whoever it was that you’re not going to take away my smile. I’m going to keep on going. I’ve been part of this sport for a really long time. After all, we won today. The pre-race deal was probably one of the hardest things I’ve ever had to witness in my life…It’s truly incredible and I’m proud to be a part of this sport.”

NASCAR will run an unprecedented doubleheader next weekend at Pocono, with races on Saturday and Sunday.

Previous Post: « Missouri partnership provides telemedicine at no cost to some Medicaid users
Next Post: MLB Commish sets 60-game schedule for 2020. Players could report to training by July 1 »