The state Department of Social Services (DSS) has announced an additional $15 million in funding for the low-income home energy assistance program (LIHEAP). 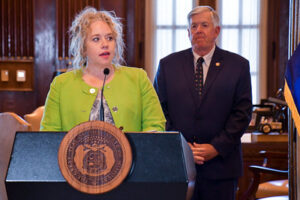 DSS Acting Director Jennifer Tidball made this week’s announcement during a Statehouse press conference in Jefferson City, where she joined the governor. Tidball tells Capitol reporters that the program assists low-income Missourians with payments for their summer cooling bills through September.

“The additional dollars doubles the maximum benefit amount to $600 per household and allows the Department of Social Services to serve a greater number of Missourians,” Tidball says.

She emphasizes that dangerously high temperatures can make homes unsafe.

“Excessive summer heat is dangerous and an additional hardship for many Missouri families struggling financially and unable to afford their cooling bills,” says Tidball.

To be eligible for LIHEAP, low-income Missourians must be responsible for paying home cooling costs. They also must have $3,000 or less in bank and retirement accounts, and have a household income of 135 percent or less of the federal poverty level.

Tidball says Missourians who have questions about the program can call DSS at 855-FSD-INFO. That number is answered weekdays from 6 a.m. to 6:30 p.m.