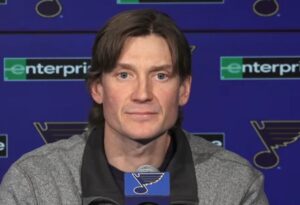 Jay Bouwmeester has been nominated for the Bill Masterton Memorial Trophy, which is given annually to the player who best exemplifies the qualities of perseverance, sportsmanship and dedication to ice hockey. One player from each team is nominated by the Professional Hockey Writers’ Association, and the nominees will be narrowed down to three finalists prior to the NHL Awards.

The Masterton Trophy is frequently awarded to players who have overcome or battled career-threatening injuries or life-threatening illnesses. Bouwmeester suffered a cardiac episode during the Feb. 11 game against the Anaheim Ducks and underwent surgery to install an implantable cardioverter defibrillator that will restore his heart’s normal rhythm in case of a similar future incident.

Bouwmeester has not played since Feb. 11 and announced at a press conference in late February that he wouldn’t return for the remainder of the 2019-20 season or playoffs.