Gov. Mike Parson has announced today that he has chosen to switch a Medicaid expansion measure from the November general election to the lower-turnout August primary election ballot. During today’s press conference, he says the sooner he knows whether to prepare for the extra state budget spending, the better. 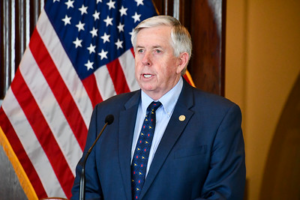 “At a time when our state is undergoing a major health, economic and budget crisis, we need to know exactly where we stand when it comes to a massive spending initiative for Missouri,” says Parson.

Americans for Prosperity-Missouri, a free market organization, today filed a lawsuit challenging the validity of the Missouri Medicaid Expansion Initiative. The lawsuit contends that the ballot initiative violates constitutional requirements since the initiative would require appropriating money to fund the initiative.

“This lawsuit is intended to protect the ballot initiative process. This ballot initiative violates the Missouri Constitution by mandating the state fund the expansion of Medicaid without providing a funding source. This mandate will divert critical funds from our children’s education or force the state to increase taxes. At a time when our state is already in dire economic straits, we should not tie the hands of the legislature with this unconstitutional ballot initiative,” says AFP-MO State Director Jeremy Cady.

The Healthcare for Missouri campaign wants to put another 230,000 low-income adults on Medicaid. If approved by voters, those earning up to $18,000 annually could qualify.

State Auditor Nicole Galloway, a Democrat running for governor, says Parson has “put his own political needs ahead of Missourians”.

“The governor and his special interest allies have already started to mislead voters, telling them that they must choose between funding our schools or access to healthcare. Governor Parson has said he will raise taxes if we vote to expand Medicaid. Every reputable study and the experience of other states that have expanded Medicaid show clear benefits to Missouri’s bottom line. The Governor’s dishonesty won’t work, but it reveals how desperate he is to maintain his hold on power and to deny healthcare to working families,” Galloway says in a statement.

On Friday, Secretary of State Jay Ashcroft, a fellow Republican, certified the initiative petition – giving the governor a little time to decide whether to make the switch. In a press release, Ashcroft says his office verified signatures using random sampling – a quicker way – instead of the usual method of sending them to local election authorities. He says he used the approach because local election authorities are busy preparing for the June 2 municipal election.