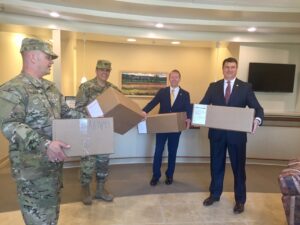 “And will go to hospitals that are in the most highest need that have a low supply of face shields,” Wiemann says.

The shields will also go to health care workers in high-need clinics, along with EMS and shelter employees.

Wiemann tells Missourinet he’s grateful for the former members of the State Defense Force, for the donation. Wiemann, Schnelting and Col. Bottorff coordinated the donation, after working with GetMePPENational and its affiliate, Boston Scientific. They also worked with the Purdue University Parents Association.

The face shields were made by Boston Scientific.

“When you’re in a medical environment, there are liquids, there are airborne things that are floating in the air, that someone could cough in your face, and it may not necessarily block them from getting into your eyes or other parts of your body,” says Wiemann.

As for Representative Schnelting, he’s a former member of the Missouri State Defense Force. The freshman Republican is crediting the organization for helping to secure the donation. Schnelting notes the health care employees will be receiving CDC and FDA-certified protective face shields.

Schnelting, who serves on the Missouri House Special Committee on Homeland Security, notes the State Defense Force has a dual mission: homeland security and disaster response.

“So securing items like PPE for those on the front lines in a scenario like this pandemic plays right into the purpose of the State Defense Force,” Schnelting says.

The State Defense Force was a military reserve force in Missouri that was inactivated due to budgetary concerns, on the same day the state received its first case of COVID-19. Col. Bottorff praises the Legislature for restoring funding for the Force, last week. The Colonel also says he hopes Governor Mike Parson “will see the great value of reactivating the State Defense Force.”

Schnelting says the shields will be deployed to health care workers, with the greatest need in the state.

Pro Tem Wiemann credits Bottorff for identifying the face shields, which were being warehoused in another state.

“We knew we needed to move quickly because these face shields are in high demand,” Wiemann says.

Wiemann and Schnelting also praise Missouri’s physicians, nurses, EMS and other first responders who are working around the clock to keep residents safe.

Click here to listen to the full interview between Missourinet’s Brian Hauswirth and Missouri House Speaker Pro Tem John Wiemann, R-O’Fallon, and State Rep. Adam Schnelting, R-St. Charles. It was recorded on May 18, 2020: