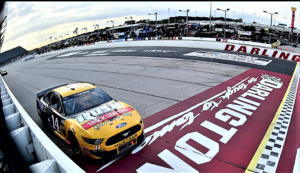 (NASCAR)—Clint Bowyer became the first driver to win the first two stages of a Cup race this year, but a brush against the Darlington wall while running fifth in the final stage flattened a tire that caused a spin with 35 laps left.  He finished 22nd in the race, shortened by rain twenty laps from the scheduled finish.

For winner Denny Hamlin, there were no victory doughnuts in front of the empty stands and no muted celebration in victory circle.  He left the track under an umbrella after rain stopped the competition. It’s his second win of the year; he also won the Daytona 500 to kick off the 2020 NASCAR racing season.

The second race at Darlington in four days was the first Wednesday night race for Cup drivers since Richard Petty won the Firecracker 400 at Daytona on July 4, 1984.

Next up is NASCAR’s longest race of the year, the World 600 at Charlotte Motor Speedway, Sunday evening. The race is traditionally run on Memorial Day Weekend Sunday but also is part of NASCAR’s compressed schedule as it tries to run a full season despite seven weeks away from competition because of the Pandemic.