(NASCAR)—Real cars on a real race track for the first time in seven weeks—but there were no fans in the stands; there were limits on the number of crew members each team could have; drivers stayed in their motorhomes until it was time to get in their cars without any practice or qualifying time.  Social distancing was the order of the day until the green flag fell.

Kevin Harvick picked up his first win of the season after battling past pole-sitter Brad Keselowski with 78 laps left in the 283-lap event at NASCAR’s first superspeedway. It’s Harvick’s fiftieth career win, a number reached by only 14 other drivers in NASCAR’s 70-plus years history.  He’s now tied with Junior Johnson and Ned Jarrett for 12th place on the all-time winner’s list.

Alex Bowman and Kurt Busch had the other two podium finishes—except there was no podium.

The race marked the return of Matt Kenseth after more than a year out of Cup racing. He replaced Kyle Larson, who lost his job for using a racial epithet against another driver during one of the simulated racing events that filled the fan gap since the last regular race in March. Kenseth, who had never driven a Chevrolet in his Cup career, finished tenth. It also was Ryan Newman’s first race since his frightening crash at Daytona in the first race of the season. Newman says he has no memory of the incident. Newman spun late in the race but recovered to finish 15th. 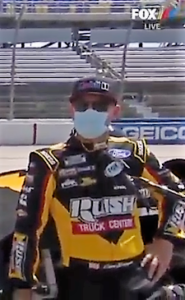 The race is the first in a rapid-fire series of races that gets the NASCAR Cup season roaring again. Drivers and teams will return to Darlington Wednesday night for a 228-lap (500 kilometre) race, then race next Sunday in the traditional Memorial Day 600-miler at Charlotte.  Three days later, they’ll return to Charlotte on Wednesday, the 24th for 500 kilometres (208 laps) on the Roval, the combination road course/oval.  The next Sunday they’ll be on the short track at Bristol, then at Atlanta a week later, June 7.  That race will be followed on Wednesday the 10th, at another short track—Martinsville before a Sunday June 14 race at Homestead. They’ll get a whole week after that to prepare for Talladega on June 21.

Counting Harvick’s victory run at Darlington, NASCAR’s Cup series will run eight races in twenty-eight days, the kind of schedule unseen more than fifty years. NASCAR ran at least fifty races a year eight times in a ten-year span, 1956-1965, topping out with 62 races in 1964.  The last time the series topped fifty race in a year was 1969.

(INDYCAR)—The Coronavirus is keeping INDYCAR from racing until June 6, when it opens its season at Texas Speedway with a Saturday night race. Races at Road America will lead up to the Grand Prix of Indy on July 4th, a unique scheduling that puts INDYCAR on the Indianapolis Speedway road course (actually, it’s as much a roval as Charlotte) the day before NASCAR’s Brickyard 400.  The Indianapolis 500 will not be run on Memorial Day weekend because of virus concerns.  It has been moved back to August 23. 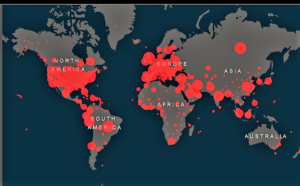 (FORMULA 1)—Formula 1 is still working on its revised schedule, a job made more difficult because several of its races are in the Southern Hemisphere where the Coronavirus is still building, as shown in the global map from Johns Hopkins University today.