You are here: Home / Sports / Salvy ready to get behind the plate again for the Royals 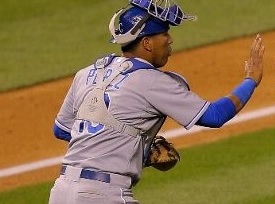 >>Perez Ready To Get Behind Plate Again

(Kansas City, MO) — Salvador Perez said in a Zoom call the extra time to heal with the baseball shutdown is helpful. The six-time All-Star catcher had Tommy John surgery in March 2019. Perez lives in Miami, where he works on his offense with special assignment hitting coach Mike Tosar and then works on his defense with catching instructor Pedro Grifol. He said he is eager to return, but playing in possible empty stadiums will be an adjustment.

If the MLB season resumes with an 82-game regular season, it wants to make sure a World Series champion is crowned. Bob Nightengale of USA Today reports the industry is concerned a possible second coronavirus wave hitting this fall before a team lifts the trophy. Nightengale writes the only way for most clubs to salvage the season economically is by having a full postseason. If there’s a regular season with empty stadiums, but no postseason without lucrative national TV money, losses would be about 150-million dollars for each club. MLB would prefer the postseason ends in early November at the latest, nixing any plans to play into December.>>Reds’ Bauer Slams MLB Proposal, Former Player Jones Calls On Stars To Speak Out

>>Players not happy with MLB’s proposal

Some baseball players aren’t happy with baseball’s return-to-play proposal. Reds pitcher Trevor Bauer called the proposal “laughable”, including in regards to the revenue sharing. Former big leaguer Adam Jones, who’s now playing in Japan, called upon star players across the league to speak out against the deal. The league is hoping for a return in early July, but they have yet to reach an agreement with the player’s association.

Medical and safety protocols will be in place if and when the Major League Baseball season begins. USA Today reports the league is trying to discourage players from spitting, high-fiving or taking Uber rides to the ballpark. A formal medical/safety plan has yet to be presented to the union.