Legislation creating a Missouri prescription drug monitoring program (PDMP) is one step away from reaching the governor’s desk, after the House voted to give it final approval on Wednesday afternoon in Jefferson City. 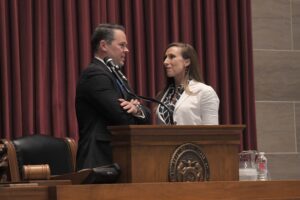 The bipartisan House vote was 94-59. During Wednesday’s heated House floor debate, State Rep. Warren Love, R-Osceola, blasted some of his colleagues, for dragging their feet on this and other issues.

“We (the Missouri House) didn’t want to have REAL ID, we’re one of the only ones that don’t have PDMP, we don’t have Wayfair internet, folks, what’s wrong with us?,” Love asks colleagues.

Love voted for PDMP, which is an electronic database that collects data on controlled substance prescriptions within a state. He’s been a co-sponsor of the PDMP legislation from State Rep. Holly Rehder, R-Scott City, for eight years.

They entered the House together, after being elected in November 2012.

While Wednesday’s vote was bipartisan, the debate exposed some tension inside the House GOP caucus. It happened when State Rep. Nick Schroer, R-O’Fallon, publicly said on the floor that a deal was made with the Senate to kill the fentanyl, date rape and carjacking bills, to pass PDMP.

“To vote on this (PDMP) bill, you are killing all of those bills in a deal that was made with the Senate,” Schroer tells colleagues. “Keep that in mind, keep that in mind.”

“But it perhaps could be individuals looking for specific information on a particular person, and how could that be used to harm someone. Very possible,” says Moon.

The bill now heads to the Senate, where it needs one more favorable vote before Friday’s deadline. The Legislature must adjourn by Friday evening at 6, under the state Constitution.

Senate President Pro Tem Dave Schatz, R-Sullivan, tells Missourinet he expects PDMP to be on the Senate floor on Thursday, adding that he is still optimistic.

“Now that we have it back in this chamber it only needs one more action, and I am sure we will try to give it that opportunity,” Schatz says.

“It (the Schroer bill) must pass the Missouri Senate before PDMP,” Onder tweets.