You are here: Home / Sports / Mizzou vs KU football is back, but you’ll have to wait a few years 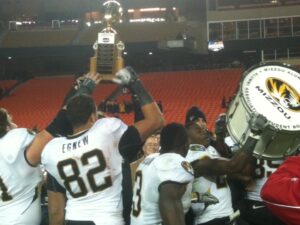 One of college football’s oldest rivalries will be renewed Mizzou and Kansas have agreed to a four-game series beginning in 2025. The Border Showdown rivalry is currently the fourth-longest in the FBS, dating back to 1891.

The last meeting between the teams was 2011, Mizzou’s last in the Big 12. At the time, it was the second-most played rivalry in Division I history. The Tigers lead series advantage at 56-55-9.