Motorists and pedestrians in downtown Jefferson City will see “blue skies” at night throughout the weekend. The Missouri Capitol dome and the nearby Law Enforcement Memorial will be lit blue through Sunday night. 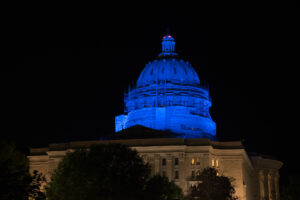 The Missouri Capitol dome will be lit blue throughout the weekend in Jefferson City (April 30, 2020 photo courtesy of Governor Mike Parson’s Flickr page)

Governor Mike Parson has ordered the dome and the memorial to be lit blue, in honor of Missouri law enforcement officers who have died in the line of duty. The memorial is located on the Capitol’s north side, which is the Missouri River side. Two names were added to the memorial this year.

The deadly COVID-19 pandemic has forced the cancellation of this year’s annual candlelight vigil and Missouri Law Enforcement Memorial Service, which normally take place this weekend every year.

The governor notes members of the law enforcement memorial board organized a small ceremony that took place Thursday evening, on the Capitol’s north side.

“Each year, the Missouri Law Enforcement Memorial ceremonies bring comfort and strength to this state’s law enforcement community as they gather to remember our brave fallen,” Governor Parson said, in a statement. “While we miss the ceremonies this May, I have ordered the Capitol and the law enforcement memorial to shine blue to honor all of our law enforcement heroes who have paid the ultimate price. They will never be forgotten.”

Missouri Department of Public Safety (DPS) Director Sandy Karsten says Missourians will “always remember those who lay down their lives for their fellow citizens.”

There were two names added to the memorial’s Wall of Honor this year, for those who died in the line of duty in 2019. Both deaths happened in June 2019, in the St. Louis area.

Governor Parson says Lakeshire Police Chief Wayne Niedenberg was driving home on June 6, 2019, when he saw a rollover crash. Chief Niedenberg radioed for assistance, and provided aid to the crash victims. The governor says the chief then suffered a fatal heart attack, after arriving at his home.

North County Police Cooperative Officer Michael Langsdorf was shot to death in the line of duty on June 23, 2019, after responding to investigate a call about a man trying to pass a bad check at a Wellston business. Governor Parson says that, during a struggle, the suspect pulled a handgun from his waistband and shot Officer Langsdorf to death.