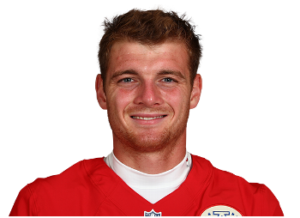 The Chiefs are releasing quarterback Kyle Shurmur. The 23-year-old joined the Chiefs last April and spent the bulk of the season on the practice squad. With Shurmur out, the Chiefs have three quarterbacks on their roster…Patrick Mahomes, veteran backup Chad Henne and Jordan Ta’Amu, who played for the St. Louis Battlehawks in the XFL.