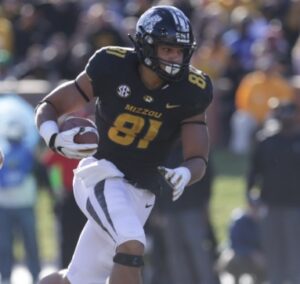 The Denver Broncos are coming after the Super Bowl Champion Kansas City Chiefs and it may be a pair of former Missouri Tigers who help lead the charge.

The Broncos had ten picks in the 2020 NFL Draft and John Elway and Broncos head coach Vic Fangio reached out to Drew Lock to get his thoughts on his former Tiger teammate, tight end Albert Okwuegbunam.

”The first phone call Vic and I made today was to Drew to find out about Albert and see what he thought about him, because he had a much better junior year when Drew was there than he had last year,” Elway said. “When Drew gave him the seal of approval we were glad he was our
target in the fourth round, plus, to put him on the other side from Noah (Fant), he’s a 4.49 guy that can really run at 258 pounds, and a big target in the red zone, so another player
with great speed we could add.”

In 2017, during Lock’s junior season in which he then set the SEC record for touchdown passes with 44, 25% of those tosses went to O as a freshman.

”I can’t even explain how fired up I am … just to have that chemistry and trust and confidence already established there,”Okwuegbunam said.