You are here: Home / Sports / Chiefs use draft to build depth around Super Bowl winning core 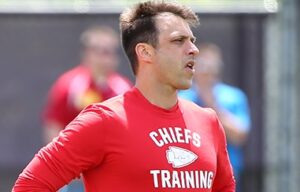 Division rivals such as the Denver Broncos used ten draft picks to build an offense around Drew Lock that could compete with the Kansas City Chiefs. Brett Veach and Andy Reid’s approach was different and needed to be after coming off their second Super Bowl title in franchise history.

The Chiefs kept 20 of their 22 starters from last year and used their five picks in the 2020 draft to build depth.

In the first round, the Chiefs added another weapon for Super Bowl MVP Patrick Mahomes by drafting
do-everything running back Clyde Edwards-Helaire out of LSU. They upgraded their speed on defense by taking Mississippi State linebacker Willie Gay Jr. in Round 2, then selected TCU offensive tackle Lucas Niang in the third round to provide depth. They wrapped up Saturday by choosing Louisiana Tech defensive back L’Jarius Sneed and Michigan defensive end Mike Danna, then traded a sixth-rounder
next year to jump back into the draft and pick Tulane cornerback Thakarius Keyes in the seventh.

”When you have the chance to return so many players and you have a coaching staff stay together, and have a group that went through and played right through February, we’ll see what happens going forward,” Veach said, ”but I think it certainly plays in your favor for the continuity and knowing the playbook and knowing what’s expected.