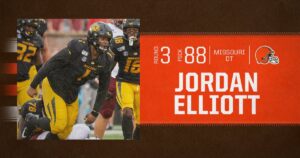 University of Missouri junior defensive tackle Jordan Elliott (Missouri City, Texas) saw his decision to bypass his final year of eligibility pay off tonight as he was selected in the third round of the 2020 NFL Draft by the Cleveland Browns. Elliott, who was a first-team All-American selection for the 2019 season (Pro Football Focus), as well as a first-team All-SEC pick, was the 24th pick in the third round, and the 88th overall selection of the draft.

Elliott’s selection extends Mizzou Football’s streak of having a Tiger drafted to 16 straight drafts (2005-20), and he becomes the 13th MU defensive lineman to be drafted in that same stretch. Elliott totaled a career-best 44 tackles for Mizzou in 2019, including 8.5 tackles for loss and 2.5 quarterback sacks. In his two-year Tiger career, Elliott saw action in 25 games overall and finished with 68 total tackles, 16.5 tackles for loss and 5.5 sacks.

Elliott is the first Tiger to be draft by Cleveland since All-American TE Martin Rucker was chosen in the fourth round of the 2008 NFL Draft.