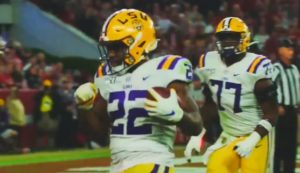 The Super Bowl-champion Chiefs selected LSU running back Clyde Edwards-Helaire [[ pronounced EE-lair ]] with the 32nd overall pick to end the first round of the NFL Draft. The 5-foot-7, 207-pounder rushed for 1,415 yards and 16 touchdowns last season for the national champion Bayou Bengals and was a first-team All-SEC selection. He also had 55 catches for 453 yards and averaged 21.4 yards on 10 kickoff returns. He was clocked at 4.6 in the 40 at the Combine.

The man ran all over the country last year! pic.twitter.com/fNRWsN5UC1

>>Chiefs Have More Draft Work To Do

The Chiefs own two picks in the NFL Draft today. They have the 63rd overall selection in the second round and the 96th overall choice in round three. The draft wraps up tomorrow with KC owning two picks, none after the fifth round.

GM Brett Veach told BJ Kissel and Mitch Holtus, the reason for the pick of Edwards-Helaire over Swift was because the 5’7 205 pound back reminded him and Head Coach Andy Reid of a running back they had in Philadelphia.

GM Brett Veach reacts to our selection of @Clydro_22!

>>NFL Draft notes
Drew Lock will have an exciting new target to throw to in Denver. The Broncos picked Alabama wide receiver Jerry Jeudy, considered one of the top receivers coming out of the draft. 15 players from the SEC were selected in the first 32 picks, that’s a record for a conference. The SEC had 12 first round picks in 2016 and 2013. LSU and Alabama’s nine combined first-rounders were the most for any two schools from the same conference in the common draft era which goes back to the 60s.