You are here: Home / Sports / Not a question of if, but when the Chiefs sign Mahomes longterm 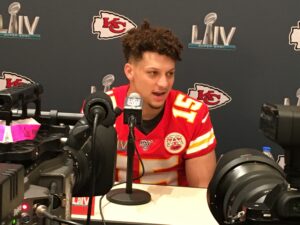 Both the Chiefs and Patrick Mahomes agent Leigh Steinberg are confident that Mahomes is going to remain in Kansas City for a long time. When a long-term extension is reached is unknown. Mahomes is entering the fourth year and will make just $2.7 million as part of his rookie contract. The money that is being tossed around in rumors is that a new would make Mahomes the highest paid player in the league at $40 million per year. The new contract may not happen this year as Kansas City has tried to work around cap issues.

“Pat isn’t going anywhere,” Veach said. “Pat is going to be here a long time. I can never sit here and speak in definitives, so I can’t say that the fifth-year won’t be an option or anything
like that. It would be hard for me to see that we’d have to use that. We feel that it’s a priority and when you have a great player, and that great player is a priority, things get done.”

On the eve of the NFL Draft it’s easy to say that trading up with Buffalo to pick Patrick Mahomes at number ten was the best draft move the Chiefs organization ever made in the first round. The worst first round pick had to have been 1983 when Kansas City took Penn State quarterback Todd Blackledge with the seventh overall pick, passing up on Jim Kelly and Dan Marino. Kelly went 14th overall to Buffalo and Marino 27th to Miami.