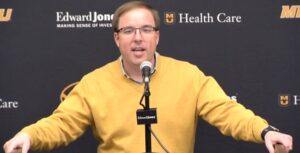 Earlier in the week, it was learned up to 20 coaches and staff members of Mizzou Athletics would be taking pay cuts.

“Part of our Win it Right culture includes togetherness, and I appreciate Eliah, Cuonzo, Robin, Brian and Steve’s unselfishness and willingness to step forward in these difficult times to voluntarily give up a part of their compensation,” said Sterk. “All five of them have impeccable character and understand the role that they play as leaders on our campus.”

Previous Post: « Mizzou adds point guard from Spanish National Team
Next Post: Would you agree to get your temperature checked before entering a baseball stadium? (PODCAST) »