You are here: Home / Sports / Missouri State basketball adds 7 to the roster 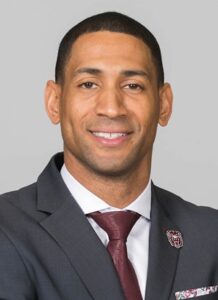 Missouri State University men’s basketball coach Dana Ford finalized his list of spring signees today (April 16) with the addition of seven newcomers who have committed to the Bears during the spring National Letter of Intent signing period.

Ford’s third signing class features three incoming freshman, three junior college transfers and a Division I transfer. Joining the Bears in 2020-21 will be freshmen Raphe Ayres, Melvyn Ebonkoli, and Skylar Wicks; Dawson Carper, a transfer from Hawaii who will have two seasons of eligibility at MSU; and juco standouts Keaton Hervey, Demarcus Sharp, and Nic Tata.

“We are really excited about our group of signees and what each of them brings to our program,” said Ford who is entering his third year at Missouri State. “Our staff has worked really hard to address our needs and help continue to build our program.”

Both Ebonkoli (France) and Tata (Australia) are international student-athletes, while Sharp (Charleston, Mo.) is the only player in this year’s class from the state of Missouri. In fact, all five domestic players in the 2020 MSU signing class hail from different states.

Ford also confirmed Thursday that three players from last year’s team – Josh Hall, Tyrik Dixon and Ford Cooper Jr. – have made the decision to transfer to other schools at the conclusion of the spring semester.

Ayres played for coach Alex Popp at Vermont Academy in Saxtons River, Vt., in 2019-20. He previously competed at Maret High in Washington, D.C. where he helped his squad to a 20-8 season in 2018-19 in addition to a trip to the D.C. state semifinals all three years of his varsity career. He averaged 8.6 points for coach Chuck Driesell’s Frogs his junior season for a 20-11 squad.

Carper averaged 6.0 points and 3.9 rebounds per game as a sophomore at the University of Hawaii this season for a 17-13 squad. He started 22-of-28 appearances and scored in double figures four times, including a season-high 20-point outing at Cal Poly for his first double-double. He also converted 73-of-119 field goals (.613). As a freshman, Carper posted 3.0 points and 2.3 rebounds in 26 appearances for an 18-13 Rainbow Warriors team. He converted 33-of-52 (.635) shots as a true freshman and earned a spot on the Big West Commissioner’s Honor Roll. He prepped at Rampart High in his hometown of Colorado Springs, Colo., where he made 69.8 percent of his career field goals to establish a new state record for FG percentage. He posted 19.8 points, 9.8 rebounds and 2.6 blocks per game as a senior while earning all-state first-team honors and leading his team to an 18-7 campaign.

Ebonkoli successfully transitioned from a standout international player in his home country of France to a Division I prospect this season at Putnam (Conn.) Science Prep Academy. He started for coach Tom Espinosa’s Mustangs in 2019-20 in his first year in the U.S. Previously, he has played for the Le Mans U17, U18 and U21 FIBA teams in France. In his most-recent season for Le Mans, he averaged 6.1 points and 5.6 rebounds per game against much older professional opponents. He played in 21 games and set a career high with 20 points and 12 rebounds vs. BCM Basket Gravelines. Just a month later, he snagged a career-high 14 rebounds in a win over Strasbourg.

Hervey posted 15.2 points and 5.4 rebounds per game this season as a redshirt sophomore at New Mexico Junior College in Hobbs, N.M. He earned All-WJCAC first-team honors and led coach Luke Adams’ Thunderbirds to a 23-9 record after knocking down 45 3-pointers and converting 75 percent of his free throws. Before redshirting in 2018-19, Keaton played his freshman season at Incarnate Word University where he started 18-of-22 games in 2017-18, averaging 7.8 points and 24.1 minutes per game. He scored 15 or more points on five occasions for the Cardinals and posted a season-high 20 points vs. Lamar (1/17/18). He was a three-star recruit from Scout.com as a high school senior at Cedar Park (Texas) High for coach Blake Brown. He also averaged 23.8 points and 8.3 rebounds for a 5A playoff team at Cedar Park (Texas) High in his junior year and was district MVP.

Sharp earned NJCAA Division I All-America first-team honors as a sophomore at Colby (Kan.) Community College in 2019-20 after averaging 16.5 points, 4.7 rebounds, 5.6 assists and a league-best 2.5 steals per game. He appeared in 32 games for coach Rusty Elmore’s Trojans and also garnered All-Region VI first team, Jayhawk West Offensive Player of the Year and Jayhawk West Defensive Player of the Year honors. He also knocked down 44 percent (48-of-109) of his 3-point attempts as a sophomore standout while helping Colby to a 27-5 record, its first-ever Jayhawk Conference regular-season title and a bid in the NJCAA national tournament. Sharp played his freshman season at Moberly (Mo.) Area Community College where he played in 35 games and averaged 4.4 points while making 28 3-pointers. He was an all-state performer as a senior at Charleston (Mo.) High School where he led the Blue Jays to a 25-9 record and state runner-up finish in 2017-18 while averaging 18.1 points, 7.2 rebounds, 5.6 assists and 2.8 steals per game for coach Danny Farmer.

Tata started all 32 games as a sophomore at Blinn College in Brenham, Texas in 2019-20. He averaged 8.6 points and 6.2 rebounds per game for a 23-10 Buccaneers squad. He converted a remarkable 73.9 percent of his field goals (122-of-165) for coach Scott Schumacher his sophomore season. During his freshman campaign at Blinn, he started 21-of-31 games he played in and converted 67-of-115 (.583) field goals and 74.5 percent from the line with 37 blocked shots. Prior to coming to the U.S., Tata played for the Aussie Elite AAU basketball club and attended Mount Eliza Secondary school in his hometown of Melbourne.

Wicks averaged 15.8 points, 5.9 rebounds and 4.4 assists per game this season as a senior at Surge Christian Academy in Clearwater, Fla. He also knocked down 42 3-pointers in 2019-20 while snagging 43 steals and leading coach John Blanchi’s Panthers to a 20-11 season. Wicks previously attended DePaul Catholic High in Wayne, N.J., where he started for coach Ryan Hagen’s Spartans.