You are here: Home / News / (VIDEO) Parson to give update Thursday about stay-at-home order

Gov. Mike Parson says he plans to give more details tomorrow about Missouri’s stay-at-home order. The restrictions are scheduled to continue through April 24.

“We’re in the process of working on that order now,” he says. 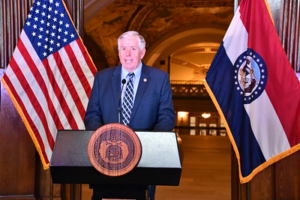 Some Missouri communities, including in the Kansas City and St. Louis regions, are discussing whether to extend their own stay at home orders. During today’s COVID-19 briefing, Parson says he’s had a number of conversations with other governors and local elected officials about moving forward.

“We will also begin looking at a plan to reopen Missouri,” says Parson. “That said, I want to assure everyone that public health remains our number one priority.”

He says leaders are looking beyond the coronavirus and starting to make plans to reopen the state, knowing the virus is going to be around for a while. Parson says his office has been in contact with Kansas Governor Laura Kelly’s office about setting up a strategy to reopen the states for business. He says his office is also in communication with other governors, especially ones in the Midwest, about figuring out a plan for the future.

Parson says testing and social distancing are the most important factors in getting COVID-19 under control and the economy back on track.

“Once testing is where it needs to be, then we can open the state back up. But again, until that time comes, it is critical for everyone to continue following the stay-at-home Missouri order, especially in the next couple weeks,” says the governor.

The governor pleaded to Missourians to step up.

“I am cautiously optimistic that we are on the curve and hopefully we are going to start going the other way,” says Parson. “But it is critically important for us to make sure and abide by this order for the next couple weeks. I can’t stress that enough to you because decisions will be made in the near future of how Missouri moves forward according to what those next two weeks look like.”

The state says nearly 4,900 people have tested positive and at least 147 people have died in Missouri from COVID-19. About 49,000 people have been tested for the respiratory disease.