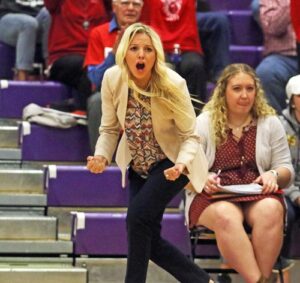 After six seasons leading the Drury University women’s basketball program, Molly Miller has accepted the head coaching position at Grand Canyon University, a D-I in Phoenix and a member of the Western Athletic Conference.

Miller’s coaching record at Drury was 180-17. Her .914 winning percentage is the best mark in program history and leads all active women’s basketball coaches. The Lady Panthers were 32-0 and had the number one national ranking in Division II before the season was canceled.

Miller will leave Springfield as not just one of area’s most accomplished coaches, but also as of the region’s best players in history. Molly (Carter) Miller was a four-year standout for the Lady Panthers from 2004-08 and still ranks fourth on Drury’s all-time scoring list with 1,570 points. She ranks third all-time in assists (439) and second in steals (409).In her four seasons in a Lady Panthers uniform, Drury amassed a record of 112-18.

Miller also starred at Kickapoo High School in Springfield, helping the Lady Chiefs to state championships in her freshman and junior seasons. In 2002-03, Kickapoo went 31-0 and were ranked 13th in the nation by USA Today. They went 110-9 during her four years on the varsity squad. She was named an all-state performer three times in her career, a four-time all-academic selection in the Ozark Conference, and graduated from Kickapoo as the valedictorian of her high school class.

A national search for Drury’s next head coach will begin immediately.

The Drury Lady Panthers have an all-time record of 520-109 (.817) since their inception in 2000-2001, and have made 17 appearances in the NCAA-II tournament, won nine conference championships, and four regional titles.