You are here: Home / Health / Medicine / Missouri Senate gets back to work today

The Missouri Senate plans to get back to business today. Senators have been on break for more than three weeks, as the number of coronavirus cases started picking up statewide. Senate President Dave Schatz, R-Sullivan, says the upper chamber will consider the governor’s request for additional spending, often called a supplemental spending bill. 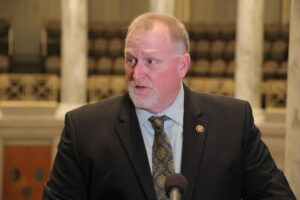 “We’ve got to find a way – it doesn’t probably get any easier at this point – but ultimately finding a way to get the supplemental passed and find a way to get potentially the budget work done. It’s still in our optimistic view that we’re going to be able to get that accomplished,” he says.”

“It’s obviously critical funding,” he says. “I think it’s a couple hundred million dollars of funding. And so it’s a substantial amount of money that obviously in this environment they’re in – rural hospitals are going to be challenged because elective surgeries, their income stream obviously has been turned off. Like most other businesses as well, they’re facing the same challenges everybody else is in being able to fund and make payroll because their income stream being basically shut down. We’re going to have to make sure that we do the right thing when it comes to finding ways to make sure we don’t put any barriers in place and keeping our rural hospitals open.”

For safety reasons, Schatz says Senators’ offices will be closed to the public, there could be a slower roll call during votes and temperature checks at entrances.

“This is kind of a test run for us to see the process in which you know we put some protocols in place to make sure that we only have essential staff and legislators there in order to try to keep as much of the public. Obviously, there’s going to be access but you know limited access for the public and the press to come in,” says Schatz.

As for the Missouri House, it plans to gavel in Wednesday at 1.

During Monday’s daily press briefing, Gov. Mike Parson signaled plans to call a special session to get a state budget passed for the fiscal year that begins in July. Parson has said that his original budget proposal – about $30.5 billion – will have to be tweaked because of the hit the state is taking from the coronavirus.