You are here: Home / Health / Medicine / Legislators to return to Missouri Capitol to vote on supplemental for COVID-19 funding (AUDIO)

Missouri lawmakers will return to Jefferson City next week to vote on a key supplemental budget, which includes millions of dollars in federal funds to battle the COVID-19 pandemic. 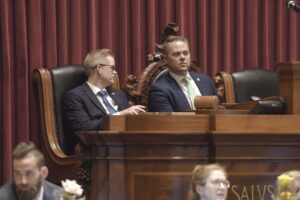 “We will get it done. I don’t envision it becoming a hyper-partisan thing by any means,” Rowden says.

Rowden and House Majority Floor Leader Rob Vescovo, R-Arnold, have been working with MU Health Care to make sure it’s safe for state lawmakers to get back inside the Capitol to vote.

The Capitol has been closed to the public since March 24, to help stop the spread of the coronavirus. The Capitol closed after veteran State Rep. Joe Runions, D-Grandview, tested positive for COVID-19. Runions has since been released from the hospital, and continues to recover.

Leader Rowden tells Missourinet that those entering the Capitol next week will have their temperature taken. They’ll also receive health questions.

“Taking temperature, asking questions making sure they’ve not been in any of the hot spots, that they don’t have any symptoms, etc.,” says Rowden.

He says they’re taking steps to mitigate risks for senators, staff and the public. The roll call will be much slower next week.

“And people for the most part will probably be in their offices,” Rowden says. “Their name will be called and we’ll give them plenty of time to come from their office into the chamber, cast their vote and then leave again. I think the House is going to do something fairly similar.”

The Senate is expected to return Tuesday morning. The 34-member chamber now has 31 senators, with three vacancies.

The 163-member Missouri House will gavel-in Wednesday afternoon at 1. House Speaker Elijah Haahr, R-Springfield, and Floor Leader Vescovo say it’s imperative that “the Legislature move without delay to keep Missouri’s government operating during this crisis and provide the needed resources to those on the front lines of the pandemic.”

The state Department of Health and Senior Services (DHSS) says there are now 1,834 confirmed COVID-19 cases in Missouri, along with 19 deaths.

Governor Mike Parson announced this week that he’s withholding $180 million in state spending, to ensure a balanced state budget during the pandemic. The governor is warning that the state could see a $500 million budget shortfall between now and the end of June.

Click here to listen to the full interview between Missourinet’s Brian Hauswirth and Senate Majority Leader Caleb Rowden, R-Columbia, which was recorded on April 2, 2020: